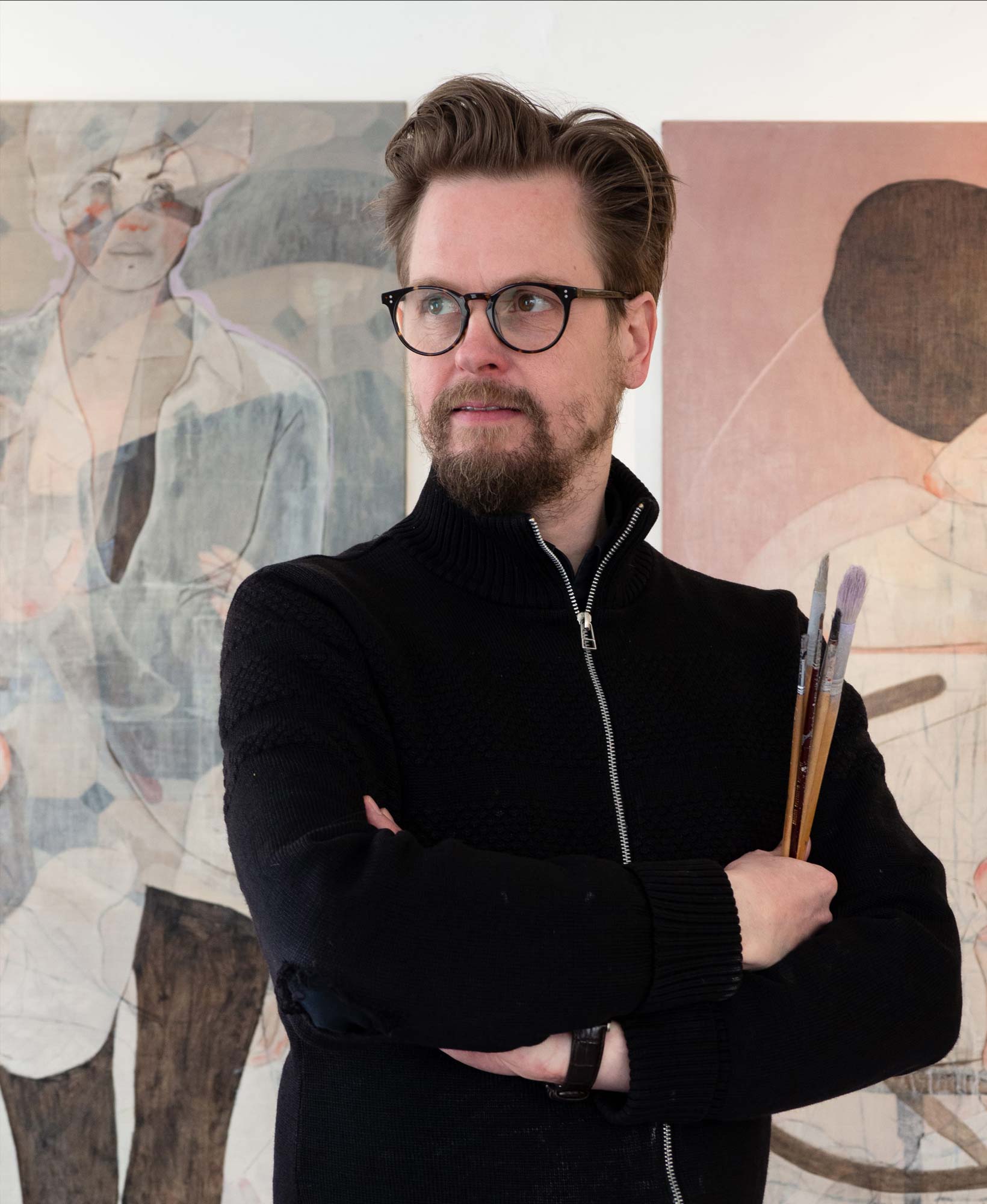 André Lundquist was born in 1972 in Copenhagen, where he received his initial training with the painter Therese Dragshøj (1909-1998). His graphic studies under the tutelage of Peter Martensen have clearly left their mark on the artist’s technique and may explain his penchant for creating tensions between the figures and shapes he creates, and the canvas weave on which they are painted.

In 1999 recipient of a scholarship from the Beckett Foundation, he has a residency in the South of Spain at the Valparaiso Foundation. Under his stay, seeking for new inspirations he wanders around the residence, which is nestled between orchards and olive groves, with breathtaking views towards the Mediterranean coast and the Sierra Cabrera and sometimes also heads off to the South of France. From those trips remain feelings and sensations alike, which Lundquist translates into light and colors.
If one decides to embrace the world of his paintings, Lundquist promises emotions. His figurative art is sensual and timeless. 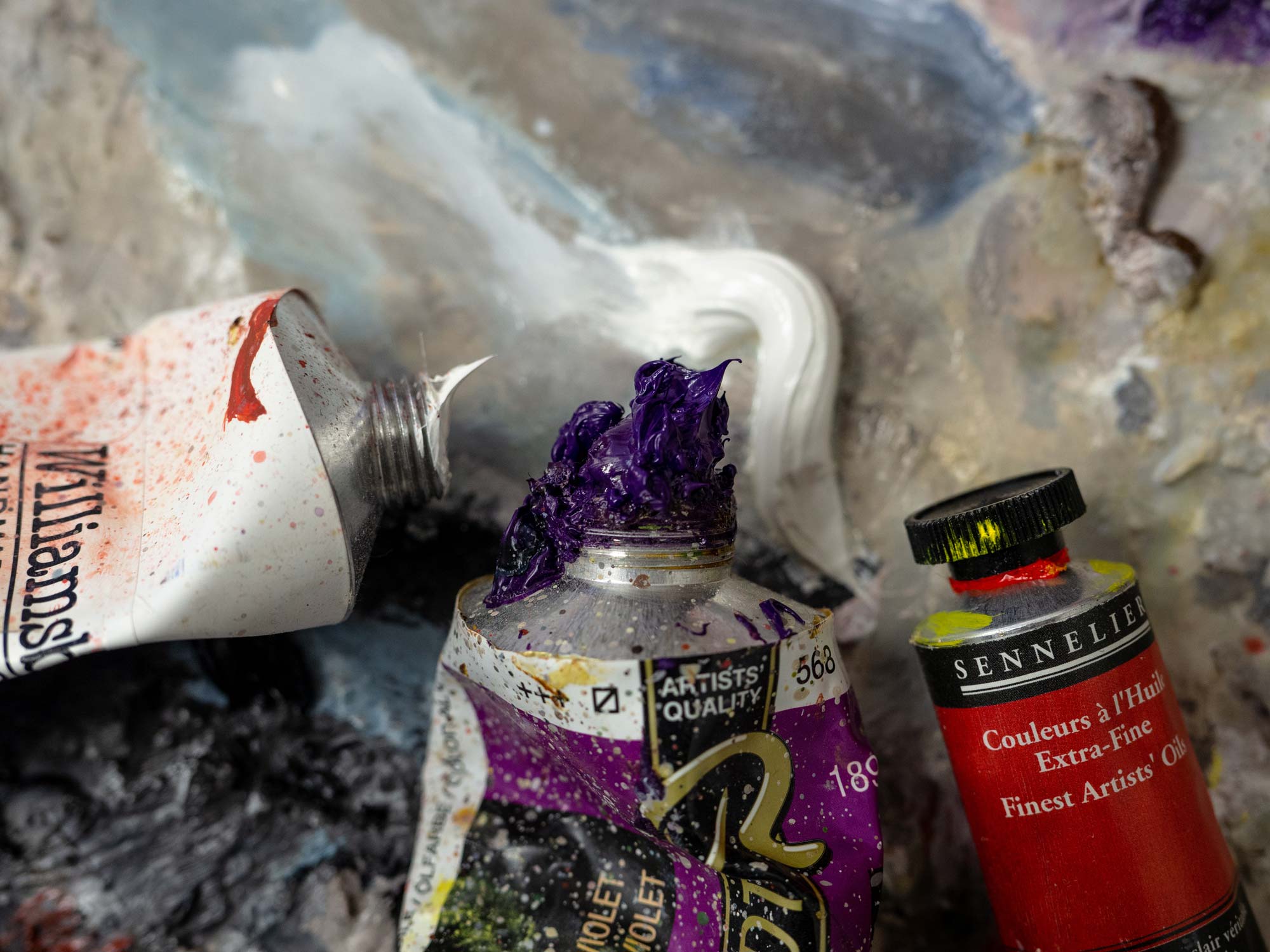 Grace, lightness, peace … are other words to describe André Lundquist’s body of work. His paintings are characterized by a silent poetry that allows the viewer to enter each painting peacefully, without fear. This is a tour de force, because for the most part, the women he sketches, paints and brings to life on the canvas, are depicted in their innermost intimacy. They are sitting, standing, lying down, kneeling … and yet one never gets the feeling of voyeurism of any kind at his end. These women are like freeze frames that let break a more complex story under the pigments of their skin, behind the iris of their eyes … Visual metaphors, they are sometimes like the mirror of our own experiences, sometimes like an open door, behind which the viewer may give free rein to his imagination. Each of these women is a story repositery containing a thousand situations to relate to or not.
Lundquist mixes oil, ink, charcoal, crayon, wallpaper. These overlays giving originality to his works got him to be recently noticed and honored by the jury of the Taylor Foundation.

The Foundation awarded him the Jean Vincent-Darasse prize, on the occasion of his participation to the 2013’s Salon du Dessin et de la Peinture à l’Eau at the Grand Palais in Paris. These palimpsests, sometimes in pastel colors, sometimes in bright ones, are the creations of an exquisite colorist whose aesthetic kinship is that of the late nineteenth / early twentieth century’s masters. Lundquist’s fascination with painters such as Gauguin, Schiele, Modigliani, Munch, Willumsen or Helene Schjerfbeck is undeniable, but his art is constantly evolving.

Representing a figurative painting in the lineage of the likes of Bonnard, Degas or Gauguin, André Lundquist has become the epitome of palimpsest, unwittingly. His work with layers is recognizable at a distance. His favorite topic – the woman – is embodied on the canvas through an intricate network of lines that he lays upon one another, on the whim of his research about the individual.
According to him, there is no such thing as a monolithic human being. As opposed to being contiguous monoliths we are multi-faceted by essence, hence the many layers of his images. When they first have a glimpse at his ethereal paintings, some state that the Danish artist’s body of work is evocative of Japan.
I asked him about this assertion and it turned out to be of no relevance, though his paintings infused with tranquility and peacefulness undoubtedly share an aesthetic and minimalism intrinsic to both nations. Like many creative people, André Lundquist is on a quest. A never-ending quest for perfection. He searches for the perfect color palette and composition alike. He searches for the perfect stroke movement, relentlessly. Prior to creating his own alphabet, prior to refining his language, André Lundquist tried his hands at a wide remit of techniques.
For a time icons interested him. He then painted a series of gold-plated works. A few years later, he would work on increasingly heavier pieces, mixing wallpaper, oil and charcoal. Today, Lundquist seems to have found his language. If one undeniably gets a hint of his younger years in his recent work, what is even more striking for the viewer is the influence one of Scandinavian literature’s most prominent authors: Inger Christensen. The Danish novelist and essayist (The painted Room – 1976) whose works and poems Lundquist all at once admires and is infatuated with, comes to the surface – almost like a Watermark portrait – in his own creations. Lundquist’s two past shows revolved around Christensen’s texts ‘Part of the Maze’ and ‘Letter in April’.
Like the Danish poet (Alphabet – 1981), Lundquist seems to have succeeded in creating a language of his own. His distinctive stroke is precise, the subtle, gossamery transparency of his paintings fully mastered. Obsessed with the individual’s intrication, André Lundquist consistently emphasizes that very complexity through a criss- crossing array of lines, which sometimes rise from underneath the colored surfaces.
Those palimpsests bring life to the figures depicted on the canvas and utterly move anyone stopping and staring at the paintings, at one’s innermost. Canvas at close range.
Lawrence Ebelle – February 2020

We use cookies to provide you with the best experience on our site.

You can learn more about the cookies we use or disable them insettings.

This website uses cookies so that we can provide you with the best user experience possible. Cookie information is stored in your browser and performs functions such as recognising you when you return to our website and helping our team to understand which sections of the website you find most interesting and useful.

Strictly Necessary Cookie should be enabled at all times so that we can save your preferences for cookie settings.

If you disable this cookie, we will not be able to save your preferences. This means that each time you visit this site, you will need to enable or disable cookies again.

This website uses Google Analytics to collect anonymous information such as the number of visitors to the site, and the most popular pages.

Please enable the strictly necessary cookies first so that we can save your preferences!