Sophie Verger was born in Paris in 1953. As a teenager, she attends The Academy of La Grande Chaumière and evening classes at Montparnasse 80. After a while, during 1970, she prepares the university entrance examination for Schools of Art in Paris at the Academy of Art Roedrer, place des Vosges. In 1971, she starts Nissim de Camondo school where she discovers sculpture during drawing workshops at the Bourdelle Museum and takes the exam at School of Fine Arts of Paris. She meets there Etienne Martin who deeply encourages her in this way and follows a classic education at the Favrat Studio.

Afterward and during several years , she opens a Studio where she models, draws, and organizes exhibitions. In 1991, first exhibition in Paris at the Colette Dubois gallery. Amazed by the exhibition at the Louvre on german sculpture of the XVth century, she begins a diversion work by modelling virgins with heads of animals dressed in big drapes which will be exposed en1995 for the Whistable festival in Great Britain. Series of shields come later from 1996. She creates, at that time, among others, a piling of timeless warriors inspired by Craonne song. This piece is presented in 1999 at Lineart of Ghent. Then is born the serie of eggs, eggs which explode, releasing characters with wide eyes opened.

A first large-scale exhibition takes place in 1999 at Grouchy Castle for whom Jeannine Rivais writes an article. A second exhibition takes place at Rope factory, a former factory located to Etaples, near Touquet.
In 2000 she wins a Public Award for the exhibition ”Sculpture and garden” in Lille on the animal theme, which becomes little by little for her an inexhaustible source of inspiration, strengthened by its meeting with Caroline Corre and the thematic exhibition”animal”. She edits her first bronzes. The Got gallery presents its work. First personal exhibition abroad in Brussels in 2001 in the Antic and Art gallery and first exhibition at the Pompon Museum in 2003. The same year, the Lise Cormery gallery, will exposed her first rhinoceros.

At the MAC exhibitions in 2003 and 2005, she establishes a deep professional network which allow her to widen her representativeness. Several municipalities acquire her works. Daniel Boulanger, met through the Gilbert Dufois gallery writes on his work. In 2008, she exposes for the first time in Germany, then at the Burgerweshuis of Zierikzee in Netherlands. Then, several exhibitions will follow. Today, she is preparing an exhibition that will occur in Paris in June, 2014 both in two places: one at the main courtyard of Sorbonne (face to the Pantheon) and at Lise Cormery gallery , Lanneau street.

Her work is now present in collections deprived in France, the United States, Switzerland, Germany, Great Britain, Belgium and Netherlands. 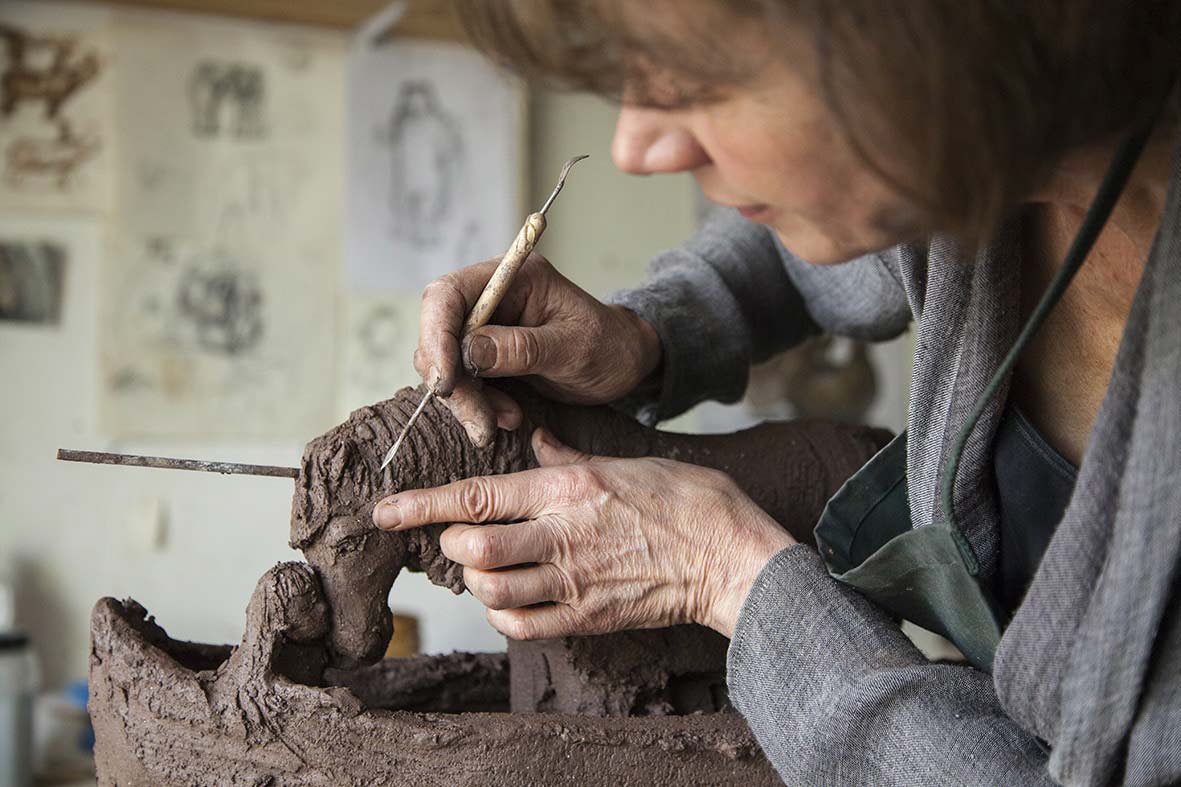 “My work plunges into the” past-present “cultural reservoir to speak of the living and of us men through the animal mask, uniting man and beast in the same feeling. In this sense, it is timeless. ”
Sophie VERGER was born in Paris in 1953. From adolescence, she attended the Académie de la Grande Chaumière and the Montparnasse 80 evening school.

In 1971, Sophie VERGER entered the Nissim de CAMONDO school, where she discovered sculpture during drawing workshops at the BOURDELLE Museum. She passed the entrance exam to the Beaux-Arts which she joined in 1971. She met Etienne MARTIN there who strongly encouraged her along this path and followed a classical education at the FAVRAT workshop.

In 1991, first exhibition in Paris at the Colette DUBOIS gallery. Amazed by the LOUVRE exhibition on 15th century German sculpture, she embarked on a work of diversion by modeling virgins with animal heads dressed in large drapes which were exhibited in 1995 at the Whistable Festival in Great Britain.

In 2000, she won the public prize at the “Sculptures & Gardens” exhibition in Lille on the animal theme, a theme which gradually became an inexhaustible source of inspiration for her.

First solo exhibition abroad in Brussels in 2001 at the Antique and Art Gallery. First museum exhibition at the POMPON Museum in 2003.

In 2008, she exhibited for the first time in Germany, then in the Netherlands, at the Burgerweshuis in Zierikzee. A second exhibition of his works takes place in 2010 at the POMPON Museum.

Four large sculptures were presented in May-June 2014 in the courtyard of the Sorbonne in Paris.

Exhibitions of a museum and gallery nature have followed one another until today. Sophie VERGER’s sculptures are present in private collections in the United States, Switzerland, Germany, Great Britain, Belgium and the Netherlands.